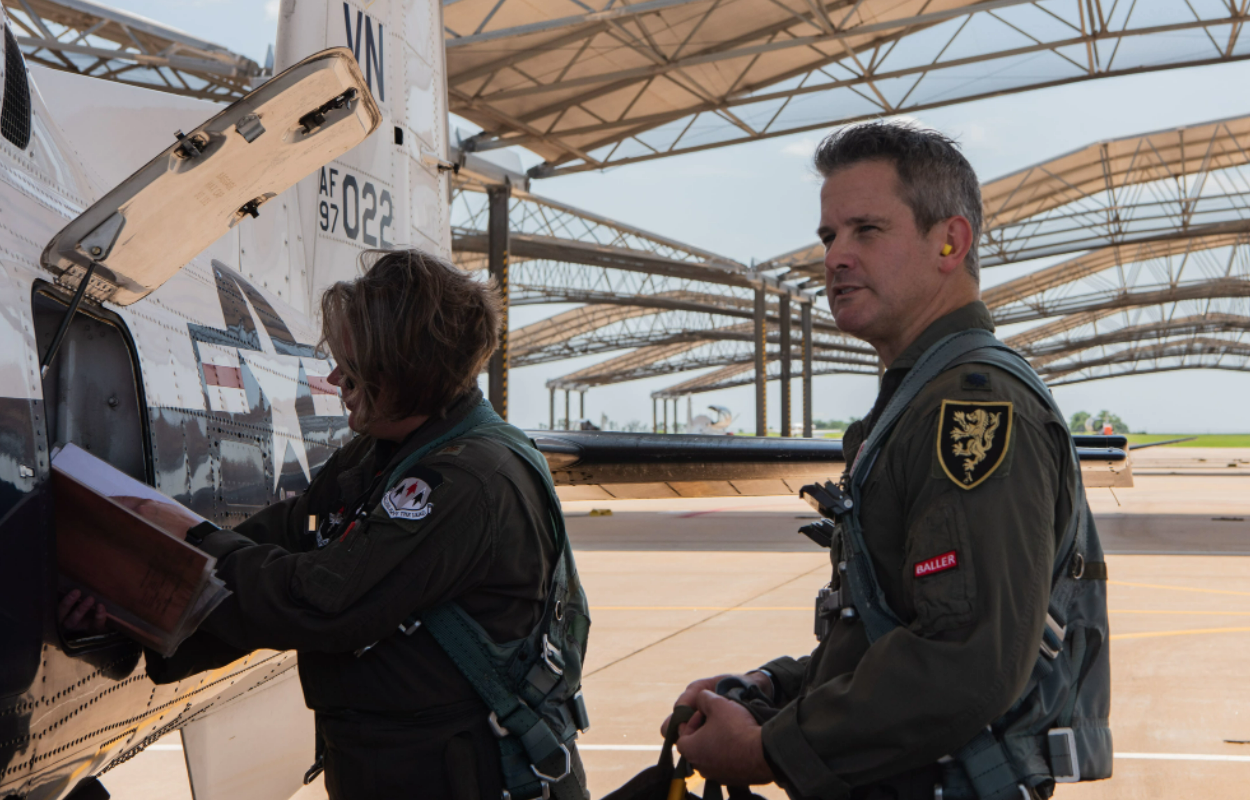 Adam D. Kinzinger is the American politician, member of the U.S. Republican party. Prior to being elected to Congress, Kinzinger served in the Air Force in both Operation Iraqi Freedom and Operation Enduring Freedom. Kinzinger continues to serve as a pilot in the Air National Guard, with the current rank of Lieutenant Colonel.

The other countries are fearful of Russia using its nuclear weapons. If that’s the case, why are those countries not considering the fact that once Russia uses its nukes in Ukraine, there will be nothing stopping them and it will be just a matter of time until their people will also be facing Russia’s attack? Would you say that the other countries should not fear Russia’s threats and help Ukraine end its political and military ambitions with the war with Ukraine?

Look, Russia knows very well that if they threaten the use of nuclear weapons, it’s gonna scare a lot of people. And no doubt it is frightening the idea of using nuclear weapons. But this isn’t new for us. You know, during the entire Cold War, the Soviet Union threatened the use of nuclear weapons all the time. And we just knew that we would have to stand up to them. We called them out on their bluff. We also know we have the capability to use nuclear weapons and nobody in their right mind wants to destroy the world. I think if we allow the threat of nuclear weapons to freeze us into action, it’s a very dangerous message not just to Russia, who can then use that same threat if they decide to go after a NATO member or take the rest of Georgia or Moldova. It’s not just a threat, you know, to them. It’s also sends a very strong message to any other country that thought about getting nuclear weapons. Now would be a good time to get them because nobody comes out against you. So, I think it’s important for the West to recognize this. We don’t want to be reckless, obviously, and we have to recognize the real concern. But Vladimir Putin is not gonna use nuclear weapons. At least not strategic nuclear weapons. He may just simply escalate to get us to back off. But I do think it’s becoming more and more clear as we see the atrocities in Ukraine that we’re gonna have to do more.

​​The American government has already done a lot to support Ukraine. However, not all Members of Congress are supportive or still hesitant about providing Ukraine with all the necessary weaponry to win the war with Russia. Here in Ukraine, we view the current state of inaction as such that could be leading to increased risks. Could you please share your outlook on this situation?

What I think, there’s gonna be a lot of attention given to those members of Congress that are somehow Russian sympathetic. I think it’s very important to know that there are not many. You know, when it comes to the hundreds of people in Congress or in the Senate, very much their strong support for Ukraine. But I do think, you know, having that group of folks that can look at somebody, like Vladimir Putin, and be defensive. I mean to me. That’s frightening. To me, that’s something that should never exist in the US at all. But it is what it is. They’re vastly outnumbered at this moment. What we need to make sure of is that we continue to get this support forward to Ukraine. That bureaucracy, and I know, you know, you guys are familiar with bureaucracy. That bureaucracy doesn’t get in the way of getting the stuff we need to Ukraine. Look, Ukraine is fighting this fight for all of us. And while I wish NATO would intervene and do more, given that they’re not, we have to make sure that Ukraine has everything they need.

How should (or could) the United States assist Ukraine in restoring the safety of navigation and bringing back the capacity of the Ukrainian navy?

When it comes to the capacity of the Ukrainian Navy, that would be a long-term investment. Look, the United States is very good at something called FUNOPs, the freedom of navigation operations. Certainly, we need to get more ships for the Ukrainian Navy; understand that the Ukrainian Navy will have to play a very important role in the Black Sea in the future. We’ve seen Russia basically shut down Black Sea access. And it’s important not just for Ukraine but for the United States in our allies to have a solid partner when it comes to preserving the integrity of navigation of the seas. Again, this is something that I think probably will certainly have to wait till the end of the war, but something that we should partner with Ukraine to make sure we modernize their Navy and have a solid partner in the black sea. The other thing is, again, the anti-shipping missiles. The ability to defend your coast is very important.

Ukraine needs to completely reform its military aviation over the next few years. The United States is often named among the potential partners in this process, but is the US ready to be selling the modern fighter jets and weapons to Ukraine, and assist in setting up the necessary infrastructure for this?

Well, the Ukrainian Air Force’s certainly shown its capability. What it means now is the equipment, as we’ve seen with the land forces, their ability to move agilely, quickly, in small teams, residual and resistant command and control, which obviously the Russians have very much struggled with. We can modernize the Ukrainian Air Force. You know, at this point, Ukraine is still flying Soviet-era weapons and Soviet-era airplanes. And that’s obviously an issue. And just like any Eastern European country, to transition to US and NATO equipment takes time. But I think when this war is over. And frankly, I’d love to see it begin to happen now. I think that’s certainly on the table to modernize Ukraine’s air force with NATO weapons. It takes training in a new plane. As a pilot myself, If I can know how to fly, all I want I can know how to fight and combat, but I still have to go through a process of learning a new aircraft and learning its weapons systems. So now may not be the time to do that. But certainly, when this war is won, the US should be looking to partner with Ukraine and the Ukrainian Air Force.

This question goes to you as a person with extensive combat experience. In your opinion, what kinds of weapons does Ukraine need to have in its arsenal to win over Russia?

Well, the first thing any fighting force needs, which Ukraine has in speed, is a reason to fight and the will. And obviously, when it comes to Ukraine versus Russia, you have plenty of that. But in my experience, the weapons that are needed now. Obviously, we’re seeing the javelins, the anti-tank weapons, some of the anti-air. We need bigger range anti-air defenses like the S-300. I think we need to allow the transfer of this mix to Ukraine. Because Ukraine has the people to fight in the Ukrainian Air Force, it needs the material, anti-shipping missiles, those are gonna be very important, plenty of small arms ammunition. We just think of the basic bullets that are essential in this, as well as body armor, night-vision goggles, and of course, tanks’ long-range artillery. Basically, Ukraine needs everything. But the thing the most important in this fight, truly, even if you’re missing some of those items, is a reason, a reason to fight, and a will to fight. And definitely, Ukraine is winning on that front.