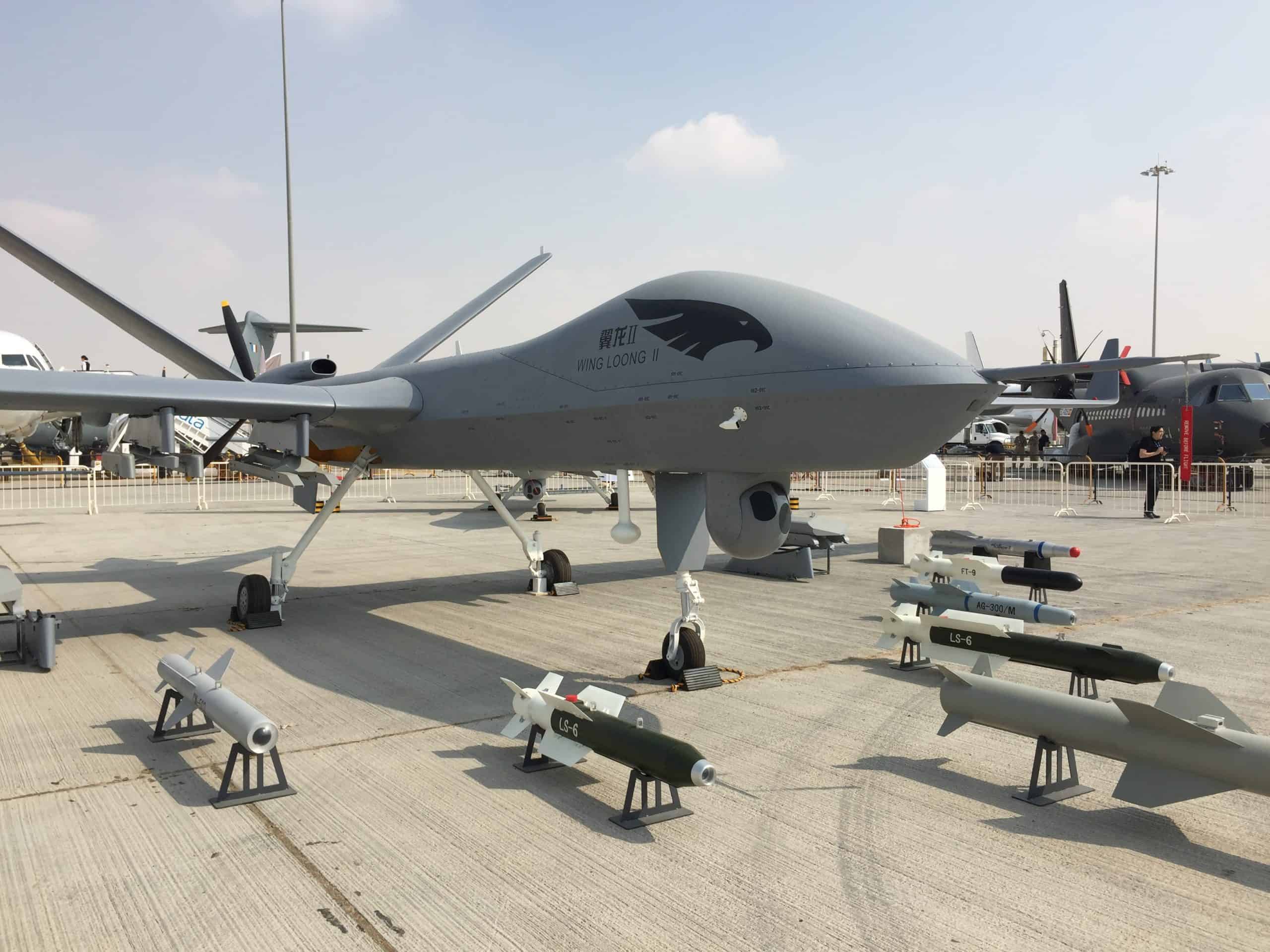 Almost two decades ago, the first armed drone strikes in Afghanistan in October 2001 and in November 2002 in Yemen made headlines. From isolated newsworthy attacks, drone strikes have become a regular feature of military operations since then. An increasing number of both States and Armed Non-State Actors (ANSAs) are using armed drones to carry out attacks, within and outside zones of armed conflict, with devastating humanitarian consequences for the civilian population. For example, in the armed conflict in eastern Ukraine, all sides have reportedly used modified civilian drones for various military purposes. In some instances where these systems were employed to engage targets, civilian casualties have been reported. Many have also observed a ‘significant growth’ in the combat use of civilian drones in Yemen, Syria and Iraq. The growing use of armed drones by both States and ANSAs is a nascent development that is likely to continue and raises significant humanitarian concerns that need to be addressed. Moreover, while armed drones are not specifically regulated by international law, their use is governed by general rules of international law, including international humanitarian law (IHL). And, their use poses significant challenges for compliance with international law, including under IHL when armed drones are used during the conduct of hostilities. These challenges are exacerbated when armed drones deliver explosive weapons in populated areas. The humanitarian impact of explosive weapons is well documented.

The manufacturing and technical capabilities of armed drones vary greatly, ranging from large, expensive and very complex military drone technology to small portable military drones for both surveillance and armed attacks. In addition, though not specifically designed for military purposes, civilian drone technology can be modified to build cheap, disposable small-scale armed drones. Despite these many differences, the decisive features common to all drones is that they are a crewless aircraft that can remain in the air for a certain time period and are piloted remotely. The focus of this piece is on the impact of armed drones when they are used to engage targets. Yet it deserves to be highlighted that drones serve many other purposes, including the collection of information and target identification, which also support strike capacity.

Some States possess high technology armed drones that can be used to target individuals overseas. The civilian population feels the effects of such attacks thousands of kilometers away from the place where the pilot operates the aircrafts. Most famously, the United States has carried out such attacks in different parts of the world, including Afghanistan, Pakistan, Yemen and Somalia. Though to a lesser degree, other countries have also carried out such attacks. For example, France undertook its first armed drone strike in Mali in 2019, the United Kingdom used armed drones in Syria and Russia reportedly deployed armed drones in Syria.

Humanitarian concerns raised by the use of armed drones

While the use of armed drones reduces risks for the users, drone strikes increase the risks to the security of affected communities. Beyond death and physical injury, drone strikes cause multiple forms of harm, including mental trauma. The increasing use of weaponized civilian drones further compounds these threats to civilians. First, weaponized civilian drones increase capacity to undertake attacks. In his 2013 report on the protection of civilians, the United Nations Secretary General noted in relation to the proliferation of the use of armed drones by all Parties to a conflict that ‘[a]s the ability to conduct attacks increases, so too does the threat posed to civilians.’ Second, a growing array of counter-measures against such drones are put in place to deal with this new threat, ranging from identification and tracking systems to various kinds of interdiction measures, which in turn lead to further humanitarian challenges. For example, kinetic measures used to destroy armed drones, such as missiles, rockets or another drone, further expose the civilian population to harm. The deployment of radio-frequency and GPS jammers to interfere with armed drones may interfere with everyday and often critical civilian applications of GPS ranging from bank machines to air traffic control, and  hinders the use of unarmed drones for independent conflict monitoring activities. Though these developments are only nascent, the proliferation of the use of armed drones by all parties to a conflict and the adoption of counter-measures are likely to continue and pose significant challenges for the safety of the civilian population.

These humanitarian concerns are further exacerbated by a series of distinct legal concerns surrounding the use of armed drones. First and foremost, in many instances the identification of the applicable legal framework, namely IHL or International Human Rights Law (IHRL), is contested, largely depending on whether an attack takes place as part of the hostilities during an armed conflict. Though this piece focuses on the IHL principles governing the use of armed drones during hostilities in an armed conflict, the relevance of IHRL for the analysis of drone strikes deserves to be underlined. In particular, the use of armed drones raises serious concerns for the accountability and transparency of drone strikes as well as the question of access to remedies for the victims and their next of kin.

The use of armed drones is not specifically regulated under international law. But their use is governed by general rules of international law. Armed drones are not weapons in themselves, but platforms that deliver a weapon. Under IHL, means of warfare covers weapons, weapons systems or platforms. The way such weapons, weapons systems or platforms are used is considered a method of warfare. Hence, the use of armed drones as a means and methods of warfare is regulated by the IHL rules governing the conduct of hostilities, namely the principles of distinction, proportionality and precautions in attack as well as the prohibition of indiscriminate attacks.

The principle of distinction demands that the Parties to the conflict only engage military targets, whether these are objects or individuals. The principle of proportionality requires that even when military targets are engaged, the expected collateral damage (i.e. adverse impact on the civilian bystanders or the civilian infrastructure) is not excessive in relation to the direct military advantage anticipated from the attack. The parties are also required to take a range of practical measures of precaution in attack, so as to make sure that the principle of distinction and proportionality are met. This includes the duty to verify that the targets of planned attacks are not civilian objects or civilians. Linked to the principles of distinction, proportionality and precautions in attack, the prohibition of indiscriminate attacks covers broadly speaking two types of attacks. First, attacks that are not directed at military objectives. Second, attacks that are undertaken with means or methods of warfare that cannot be directed at military objectives or whose effects cannot be limited as required by IHL.

Depending on their specific features, the use of armed drones, both military grade and weaponized civilian drones, poses a series of challenges to implementation of these rules. Military-grade armed drones strikes may be very accurate and precise, thus seemingly enhancing respect for the principle of distinction. Yet the accuracy of drone strikes does not mean that the target was correctly identified as a military objective. Instead, ‘the remote nature of drone attacks can (and has been) directly connected to indiscriminate attacks against both military and civilian targets’ amongst others due to the form of the information, time delay between transmission and reception of data collected by the drone, and a lack of on the ground information. Even when military grade drones strike a military target, such drone strikes may cause excessive harm to civilians and civilian infrastructure, depending, amongst others, on the warhead used. Weaponized civilian drones raise challenges for the principle of distinction, including due to their improvised nature. Moreover, the improvised explosive devices delivered by such civilian drones may have larger effects than known or intended by those who deployed them.

Finally, the targeting criteria for armed drone strikes are often subject to debate, a debate at least in part fuelled by a lack of transparency surround the policies governing the use of armed drones. In particular, it has been reported that the so-called signature or patterns of life strike, including by armed drones, by the US have relied on discriminatory signatures to identify targets, namely that all men of age in the area of “suspected activities” were considered to be automatically targetable. IHL also requires that all rules, including those on the conduct of hostilities, must be implemented without any adverse distinction. Consequently, if drone strikes are carried out in breach of these principles in a way as to discriminate against specific segments of population defined by characteristics, such as their gender, age, ethnicity, religion or disability, this will also violate the prohibition of adverse distinction.

Armed drones and the use of explosive weapons

As a weapons system, armed drones can be used to deliver explosive weapons, including in populated areas. Hence, the use of armed drones needs to be seen in the context of the humanitarian impact of explosive weapons in populated areas. IHL does not include specific rules for the use of explosive weapons, though any use of such weapons must conform with the IHL principles governing the conduct of hostilities. Explosive weapons not only present a high likelihood of indiscriminate effects, but also significant reverberating effects, in particular the destruction of vital civilian infrastructure with devasting consequences for the life and health of the civilian population. The application of existing IHL standards often fails to adequately capture and address such effects.

Geneva Call reminds all parties to an armed conflict that any use of armed drones during the conduct of hostilities must comply with relevant IHL principles. Hence, before deploying any armed drones, parties to the conflict must ensure that the armed drone is and can be directed against a military objective and will not cause excessive civilian harm. In order to foster transparency and accountability for drone strikes, parties need to properly articulate their policies governing the use of drones, including how the likelihood for civilian harm is assessed, and provide for remedies for victims. Finally, Geneva Call reminds all parties to the armed conflict that beyond compliance with IHL, parties need to consider the humanitarian impact of their use of armed drones for the civilian population, including the disruption of civilian infrastructure and mental health trauma. Geneva Call expresses its willingness to support efforts by ANSAs to prevent and address the humanitarian impact caused by armed drones.