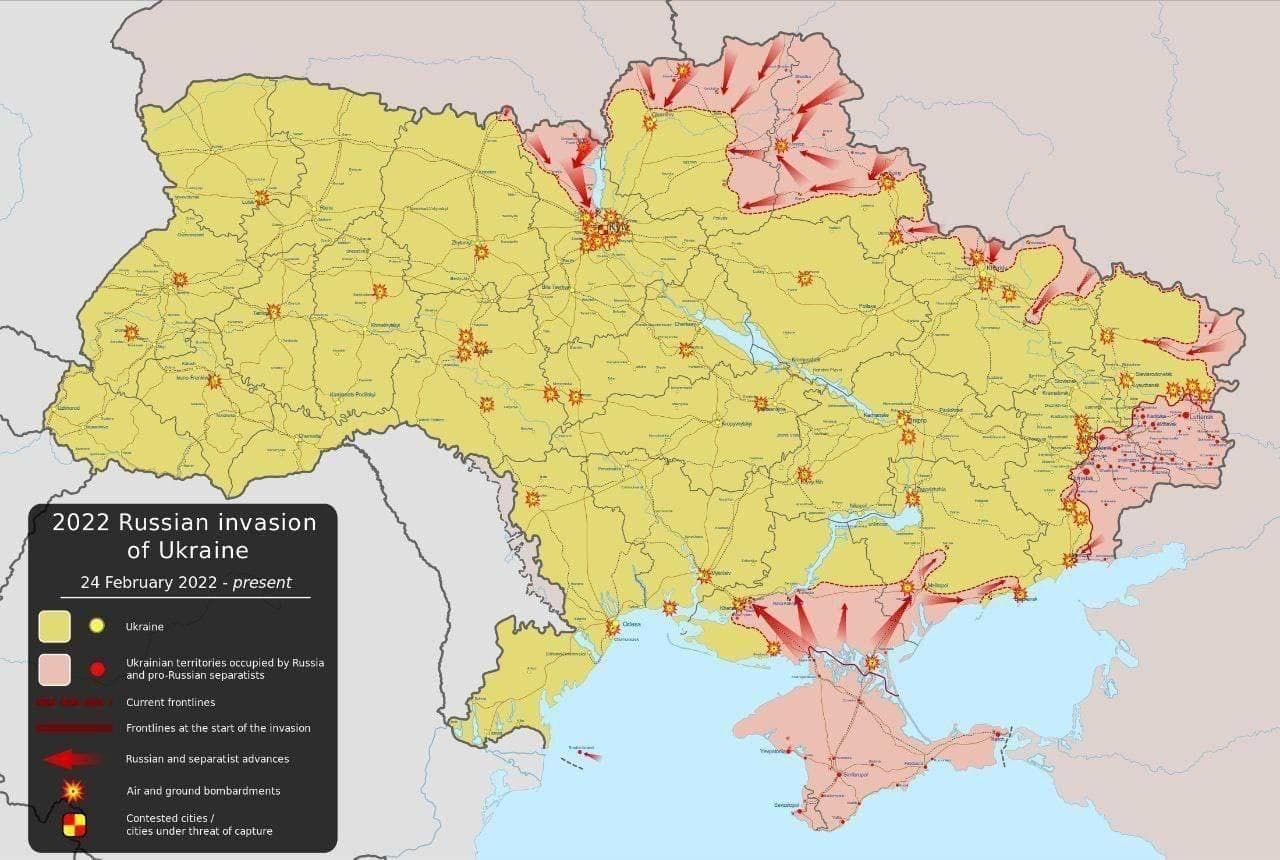 Russia’s attack on Ukraine . Chronicle of events for 26th of February

Crimes of the Russian army against the civilian population of Ukraine, February 26

Since Russian troops invaded Ukraine on the night of February 24th, 2022, Russian troops committed massive violations of the laws of war. They shelled the civilian infrastructure, including hospitals, fired on ambulances, destroyed habitat, kindergartens, and schools.

According to the Minister of Health of Ukraine Viktor Lyashko on the night of February 25th, 2022, 53 injured civilians were transported to the hospitals.

As of the 26th of February:

🩸The mayor of Mariupol informs about the heavy shelling of the Mariupol suburb of Sartan. The exact number of victims is still unknown. There is no electricity, the work of the public transport is suspended. Since February 25th there had been at least 58 injured.

🩸According to the Ministry of Internal Affairs, the shellings damaged the building of the fire and rescue brigade in Shchastia. The State Emergency Service of Ukraine is evacuating civilians to Petropavlivka village.

🩸 In Kharkiv, the shells damaged the blood transfusion center and the regional children’s hospital. There are damaged buildings in the residential areas of Saltivka and KhTZ. The precise amount of casualties is to be determined. Source: Kharkiv regional administration.

🩸 According to Kyiv mayor Vitalii Klytchko, as of the morning of the 26th of February 35 civilians were injured by the Russian shelling, two of the injured are children. Enemy sabotage groups are trying to enter the city.

🩸 The Ministry of Economy of Ukraine in cooperation with the best Ukrainian economists started to evaluate and record economic damage resulting from the Russian Federation attack. According to the minister of economy and first vice prime minister Yulia Svyrydenko, the data will be used as evidence in the International Criminal Court in Hague.

🩸 On the night of February 26th, the Russians attacked the Kyiv hydroelectric power plant. Earlier it was reported that the Russian troops landed near the Kyiv Reservoir. The Ukrainian army was able to safeguard the facility, otherwise, people in the capital would have been left without a water supply. At 8:30 AM, the Minister of Energy of Ukraine Herman Halushchenko stated that the Armed Forces of Ukraine managed to defend us and the Hydroelectric power station is controlled by Ukraine.

🩸 Ukrainian air defense systems shot down a Russian missile headed to the dam of Kyiv Reservoir dam in Vyshgorod. “If the dam was destroyed, the flood would have led to the catastrophic loss of life and damage, in particular to flooding of the residential areas in Kyiv and suburbs. In addition, destruction of the Kyiv dam might have damaged the Kaniv, Kremenchuk and other dams of the cascade, and even to the accident at Zaporizhzhia nuclear power plant”, according to the Ministry of infrastructure.

🩸 According to the Ministry of Energy, a number of overhead power lines and substations were damaged as a result of the Russian shellings. There were blackouts in:

🩸 In Kyiv, a Russian shell hit a skyscraper. It is a residential apartment building on Lobanovskoho street, 6A. The 16th and 17th floors are damaged. Civilians were injured.

🩸 According to the State Emergency Service, there is a risk of destruction of floors 22 and 23. The rescuers are evacuating the inhabitants and are looking for the injured people. The fire was put out at 9.05 AM. The shellings are interfering with the rescuers’ work: they have to seek shelter frequently.

🩸 Between 2 and 3 AM in Kyiv Russians fired at a thermal power station CHP-6 at Troyeshchyna residential area. Near the facility, there were 5 explosions with intervals of 3-5 minutes between them.

“I am in captivity, father”: what Russian prisoners in Ukraine say

We publish transcripts of interrogations of captured occupiers.

“Military unit 52724 Nizhny Novgorod. We came for the training and got here.”

The Ukrainian military allowed the captured Russian to call home:

“I’m in captivity, dad. We must decide what to do. Yes mom. I am a prisoner in Ukraine. They said go to Ukraine, we went, ma. Nobody knew anything. I don’t know what to do. Something must be decided. I need help. Everyone went. I don’t know the area in Ukraine. Mom, contact the commanders, call someone.”

On the border between Ukraine and Russia, the military spoke with a local resident. The Ukrainian assured that in case of an attack on his land, he would shoot. Russian soldier:

“We are all people, and you understand that we also have many (swearing) relatives on your side. We are crazy about all this, especially the armored vehicles in front of the yard, the children are scared.”

“We were involved in the exercises in the Crimea, worked out the pulling of the wounded and all sorts of such moments. According to the first commands, which they were giving us. We delivered them. The loading of the landing force was in a field in the Crimea. The task was also to continue the exercises. I didn’t know where I was going. Four hours after landing, we did not even understand where we were. Sorokin Denis – battalion commander.”

“We are appealing to the International Committee of the Red Cross,” said Deputy Prime Minister and Minister for Reintegration Irina Vereshchuk, “to help transport the bodies of Russian soldiers to Russia.” We ask you to organize a process for the bodies of the Russian occupiers to leave the territory of Ukraine. ”

The Russians are changing tactics: as the rapid offensive has stalled, DRG and landing are being used

The Minister of Defense of Ukraine Oleksiy Reznikov noted that the Ukrainian army and terrorist defense effectively neutralize paratroopers and saboteurs. In order to act in advance, he asks citizens to detain the correctors and hand them over to the Defense Forces

For every Ukrainian child killed – thousands of destroyed occupiers: according to the General Staff

The Minister of Defense of Ukraine Oleksiy Reznikov said that three Ukrainian children had died at the hands of the occupiers and another 33 had been injured. According to Health Minister Viktor Lyashko, we have 1,115 wounded civilians.

The Russians fired on an ambulance with wounded people near Kherson.

This was reported in the Center for Strategic Communications and Information Security. Among the victims are doctors.