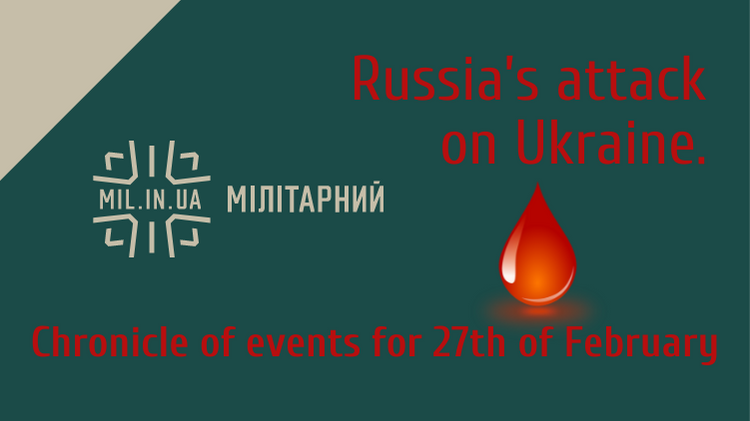 Russia’s attack on Ukraine. Chronicle of events for 27th of February

The fourth day of the war, February 27, 2022.  Russian war criminals in Ukraine are provoking environmental catastrophes – they fired on an oil depot near Kyiv and a gas pipeline in Kharkiv.  Artillery is stationed in residential areas of Nova Kakhovka in the Kherson region. Homes and hospitals are hit by shellings. Evacuation buses are shot down and ambulances are blocked, explosives are planted in residential areas of Kyiv, carrying death and hatred.

🩸 According to the head of the Donetsk Regional State Administration, Volnovakha is on the verge of a humanitarian catastrophe: residential buildings, infrastructure and the hospital were badly damaged by the shelling. No electricity. People are in shelters for the second day, it is impossible to evacuate them.

🩸 The Navy of the Russian Federation captured two Ukrainian civilian ships, the tanker “Athena” and the cargo “Princess Nicole”, according to the Ministry of Internal Affairs of Ukraine. Almost 50 civilian crew members were taken as prisoners.

🩸 On Ozernaya Street in Irpin’, three houses caught fire as a result of shelling. People might be hiding in the basements, there is no information about the victims yet.

🩸The State Service for Special Communications and Information Protection of Ukraine reports looting in Trostyanets, Sumy Region.  There are also cases of robberies in the Kherson region.

🩸The head of the Donetsk Regional State Administration reports that not far from the village Volokhiv Yar, in the Kharkiv region, Russian occupation forces fired on a route bus. Five civilians were killed and six others were injured.

🩸According to the State Inspectorate for Nuclear Regulation of Ukraine, at 1:20 Kyiv time, the shells of the occupants hit the radioactive waste disposal site. The automated radiation monitoring system has failed, the staff is in shelters. The extent of the damage and the level of pollution will be determined after the bombing.  Radiation background near the metro Pechersk within normal limits and without changes. Update from the SES: at the moment there is no danger of radiation contamination, the storage facility has not been depressurized.

🩸As a result of ballistic missile attacks in Vasylkiv, the BRSM-Nafta oil depot caught fire. A spokeswoman for the Kyiv Oblast State Emergency Service said rescuers could not approach the oil depot due to the fighting. The fire could pose a significant environmental threat.

🩸Kharkiv: According to the Main Directorate of the State Emergency Service of Ukraine in Kharkiv Oblast, the shell hit a nine-story building on Buchmi Street. As a result of the shelling, a woman died and about two dozen people had to be evacuated.

Kharkiv: the whole groups of Russian soldiers – from 5 to 10 people each – surrender to the Ukrainian troops

The Armed Forces of Ukraine, the National Police, and the Territorial Guard are operating in Kharkiv.

In addition he said that Chuhuiv is also completely controlled by the Ukrainian troops. The attack of the Russian aggressor continues in the Lypetsk, Vovchansk and Belhorod directions. 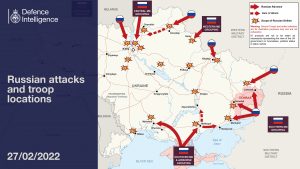 The ground forces of the Armed Forces of Ukraine inform:

– as of 13:00 on February 27, the Russian army continues its air offensive operation.

Since 00:00 on February 27, the Russian invaders launched 5 air and 16 missile strikes.

Belarus has become another centre of concentration of the occupation forces:

– ten helicopters from the 15th aviation brigade, based in the village of Ostrov, Pskov region, as well as two An-124 aircrafts of the Aerospace Forces, were deployed to the MACHULISHCHY air base;

The desperate defence of the city of Kherson continues.

A group of the Black Sea Navy Fleet of the Armed Forces of the Russian Federation was withdrawn from sea bases with the task of hitting the surface forces of the Ukrainian Naval Forces.

The enemy made attempts to land amphibious assault forces in the area of CHORNOMORSK. They are destroyed.

Residents took to the road and stopped Russian tanks without a single shot. This was reported in the Ministry of Internal Affairs. Koryukivka is a district center 87 km from Chernihiv.

About 4,300 killed: The General Staff summed up the total losses of the Russian army

In the Kherson region in Verkhny Rohachyk, Russian soldiers cleared a branch of PrivatBank at vul. Vladychanska, 2. Surveillance cameras recorded the theft.

The video was received and published by journalist and military correspondent Andriy Tsaplienko. 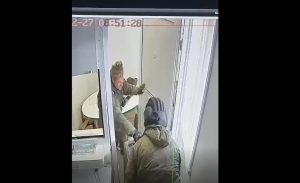 In Nova Kakhovka, Kherson Oblast, the Russian occupiers are using school playgrounds and housing estates as a springboard for their artillery. The hospital is overcrowded with wounded Russian soldiers.

This was reported by the Military Portal.

Enemy howitzers have been recorded in school stadiums and in the city itself. There are six Gradov installations on Bunina Street. There are two Hurricanes and ten Grads on the Nova Kakhovka bypass. The Russian column stands on the route Nova Kakhovka – Berislav – Dzilno – the villages of Kozatske and Vesele. 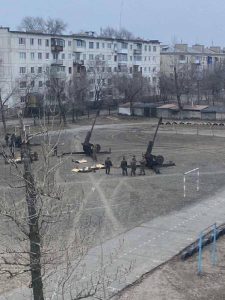 The Russians have also stationed their Grads on the territory of the Novokakhovka hydroelectric power plant and are firing on the Ukrainian army from there, as the Armed Forces will not be able to fire back on critical infrastructure.

At 5 a.m. on February 27, the Horde seized the base of the 57th Separate Motorized Infantry Brigade and set it up as a logistics center. Dnipro residents deployed a command post behind the settlement. A military town was set up in the forest belt on the May Day route. The hospital was killed by Russian wounded.

The mayor of Nova Kakhovka, Volodymyr Kovalenko, claims that the occupiers occupied only hydroelectric power plants. There are no occupiers in the city itself.

He also noted that people are not able to leave the city.

However, the words of the mayor are not confirmed by Militarny’s sources.

Residents of the city publish on social networks the equipment of the occupiers in the city itself.

Enemy howitzers have been recorded in school stadiums and in the city itself. There are six Gradiv installations on Bunina Street. There are two Hurricanes and ten Grads on the Nova Kakhovka bypass. The Russian column stands on the route Nova Kakhovka – Berislav – Dzilno – the villages of Kozatske and Vesele.