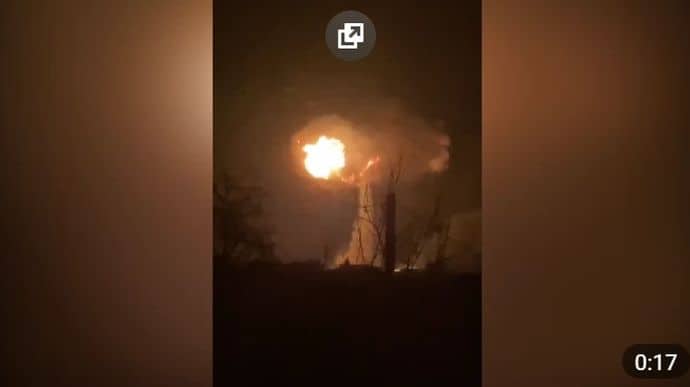 Photo: screenshot of the video of the gas pipeline explosion in Kharkiv, UE

The fourth day of the war, February 27, 2022.  Russian war criminals in Ukraine are provoking environmental catastrophes – they fired on an oil depot near Kyiv and a gas pipeline in Kharkiv.  Artillery is stationed in residential areas of Nova Kakhovka in the Kherson region. Homes and hospitals are hit by shellings. Evacuation buses are shot down and ambulances are blocked, explosives are planted in residential areas of Kyiv, carrying death and hatred.

🩸 According to the head of the Donetsk Regional State Administration, Volnovakha is on the verge of a humanitarian catastrophe: residential buildings, infrastructure and the hospital were badly damaged by the shelling. No electricity. People are in shelters for the second day, it is impossible to evacuate them.

🩸 The Navy of the Russian Federation captured two Ukrainian civilian ships, the tanker “Athena” and the cargo “Princess Nicole”, according to the Ministry of Internal Affairs of Ukraine. Almost 50 civilian crew members were taken as prisoners.

🩸 On Ozernaya Street in Irpin’, three houses caught fire as a result of shelling. People might be hiding in the basements, there is no information about the victims yet.

🩸The State Service for Special Communications and Information Protection of Ukraine reports looting in Trostyanets, Sumy Region.  There are also cases of robberies in the Kherson region.

🩸The head of the Donetsk Regional State Administration reports that not far from the village Volokhiv Yar, in the Kharkiv region, Russian occupation forces fired on a route bus. Five civilians were killed and six others were injured.

🩸According to the State Inspectorate for Nuclear Regulation of Ukraine, at 1:20 Kyiv time, the shells of the occupants hit the radioactive waste disposal site. The automated radiation monitoring system has failed, the staff is in shelters. The extent of the damage and the level of pollution will be determined after the bombing.  Radiation background near the metro Pechersk within normal limits and without changes. Update from the SES: at the moment there is no danger of radiation contamination, the storage facility has not been depressurized.

🩸As a result of ballistic missile attacks in Vasylkiv, the BRSM-Nafta oil depot caught fire. A spokeswoman for the Kyiv Oblast State Emergency Service said rescuers could not approach the oil depot due to the fighting. The fire could pose a significant environmental threat.

🩸Kharkiv: According to the Main Directorate of the State Emergency Service of Ukraine in Kharkiv Oblast, the shell hit a nine-story building on Buchmi Street. As a result of the shelling, a woman died and about two dozen people had to be evacuated.