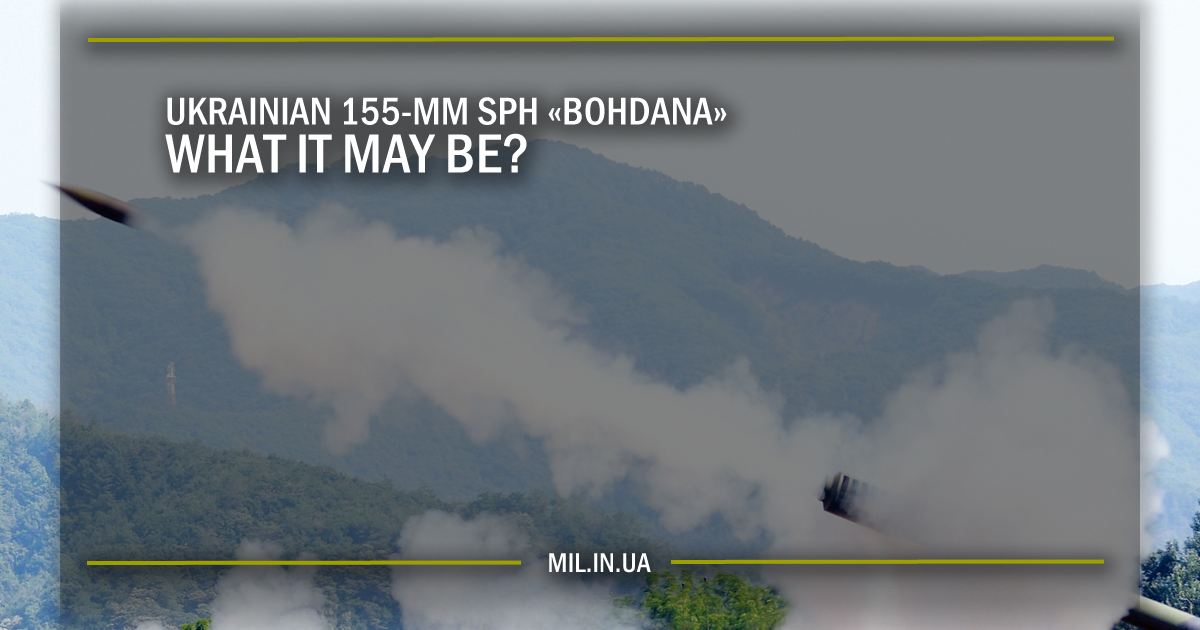 Two weeks ago Serhiy Zhurets, well informed Ukrainian defence specialist, announced presentation of a  new Ukrainian indigenous 155-mm self-propelled artillery unit code-named “Bohdana”. According to him it should be presented at the Independence Day military parade. He provided no further details on the project.  Ukrainian Military Portal decided to collect and present all open source information available on development and production of self-propelled artillery in Ukraine to predict its future look.

It is not known for certain is it the wheeled or tracked SPH, therefore, we consider several options based on experience and expertize available in Ukraine:

Legacy of the USSR – tracked SPH

First of all, we have to mention the historical heritage of the USSR – 122 mm SPH 2S1 “Gvozdika” (“Carnation”). It was produced in Soviet Ukraine at the Kharkiv Tractor Factory from 1970 till 1991, when production was seized due to lack of new orders. A 122-mm self-propelled artillery unit was based on significantly modified to the initial light-armored tracked towing vehicle MT-LB chassis. The Gun 2A31 (Index of the Main Missile-Artillery Department (GRAU) of The Ministry of Defence of the USSR) to Kharkiv made “Gvozdika” was manufactured at the Artillery Plant No. 9 in Yekaterinburg, Russia. After collapse of the Soviet Union, Russia also stopped production of that artillery piece. Russia also seized production of 122 mm towed howitzer D30 (also called 2A18 according to GRAU index) that has the same gun.

You can find out more about this war machine in the material: go

During one of the visits of representatives of the National Security and Defense Council to the Kharkiv Tractor Plant (2016), they were shown a sample of self-propelled artillery units of their own design:

Previously, only scale models were shown. But, from the published picture, we can say that there is at least one running unit of a self-propelled howitzer of its own design at the KhTF. No technical details or characteristics of the project are disclosed. Similarly, there’s no information when and how many units were produced. It is believed that instead of 122 mm gun it has 152 mm gun KBA-27, which was developed in the end of 1990th from the Soviet 152 mm light howitzer 2A61. (Please note similarity of muzzle size and muzzle breaks of Kharkiv SPH and KBA-27).

Wheeled SPH on the basis of KrAZ

In 1982, the Central Research Institute “Burevisnik” conducted a research work under the name “Chassis”. The esults of ith proved the possibility of creating a 152-mm self-propelled artillery unit based on a wheeled vehicle. At the same time, a new design work was conducted under the cipher “Opening” (Russian: “Otkrytiye”). The goal was to develop perspective family of wheeled SPH. Within the framework of these works, the Kremenchug Automobile Plant (Soviet Ukraine) produced and tested an experimental truck tractor KrAZ CR-3130:

Subsequently, in the period from 1983 to 1984, the Ural Automobile Plant and the Barikadas Production Association (both from Russian Federation) produced and tested a prototype of a 152-mm self-propelled howitzers on a Ural-5323 truck chassis. At the same time Ukrainian truck producer performed tests on the KrAZ CR-3130 chassis.

According to their results, KrAZ CR-3130 was chosen as the wheelbase of the future wheeled SPH. The obtained elaboration formed the basis of experimental design work titled “Masta-K” (the index of the GRU – 2С21)

The following work was carried out on KrAZ chassis at the “branch number 2” of the Central Scientific Research Institute “Burevisnik”, which was located in Nizhny Novgorod in the second half of the 80’s. But after the collapse of the USSR, the Russians initially stopped the development. 20 years later they renewed development works. However, refused to use the chassis of the Ukrainian manufacturer and began to develop a new SAU 2С35-1 “Coalition-SV-K” on the chassis KamAZ-63508:

Please note that the KrAZ military and commercial chassis for artillery units was used in a number of countries, such as Cuba, with the installation of a 130-mm swing gun M-46 on the KrAZ-255 chassis with a new cabin:

There is a more recognizable variant with placement of a 122-mm D-30 gun on the chassis of the same KrAZ-255:

Similar development is also in Iran – “Heydar-41” where on a more modern two-axis KrAZ-5322 all the same D-30 cannon is located:

Since, there were never any domestic guns produced (except test artillery pieces, small caliber 23, 30 mm, and smooth bore 125 mm tank guns) for artillery systems in Ukraine, it would be logical to assume co-operation with a foreign producer.

For the first time about the development became known in December 2015 from the annual report of the Concern Ukroboronprom (State owned arms producer). it was announced that Ukraine started a joint project with Poland. From the Ukrainian side, the project will be implemented by the Design Bureau. Morozov, and from the Polish company Huta Stalowa Wola.

Huta Stalowa Wola is engaged in serial production of a 155mm SUV KRAB with a licensed British AS90 Braveheart tower on the South Korean K9 Thunder chassis.

Self-propelled howitzer Krab is equipped with a TOPAZ artillery control system: each command point is equipped with a computer terminal with installed software, which allows you to control the artillery unit in real time without the need to give voice radio commands. The system interacts with similar networks at different levels of battlefield management.

According to some information, the Ukrainian side is interested in a 155-mm SPH with a tower of Polish production at the domestic tracked chassis of the T-84 tank.

In any case, waiting for open source information would not long. According to information published by Yuriy Biryukov, advisor to the Minister of Defense of Ukraine, a test of a new artillery piece will take place in early August:

Therefore, in a matter of few weeks or days we expect to find out more about the new Ukrainian self-propelled artillery unit: type of the chassis and other technical details.

Note: Ukrainian military currently operate more than 700 self-propelled howitzers and above 1000 towed artillery pieces of different caliber. All of them are Soviet-made. So on, Ukraine would face a problem of maintenance and shortage of ammunition to some of the most advanced and long-range artillery. Ukraine should either try to reverse engineer old Soviet equipment (as well as some ammunition) and start its production on its own or develop and start production new artillery pieces in cooperation with Western partners. Evidently, Ukraine decided to develop along with NATO countries as it is proved by introduction of 155 mm caliber for a new self-propelled howitzer.